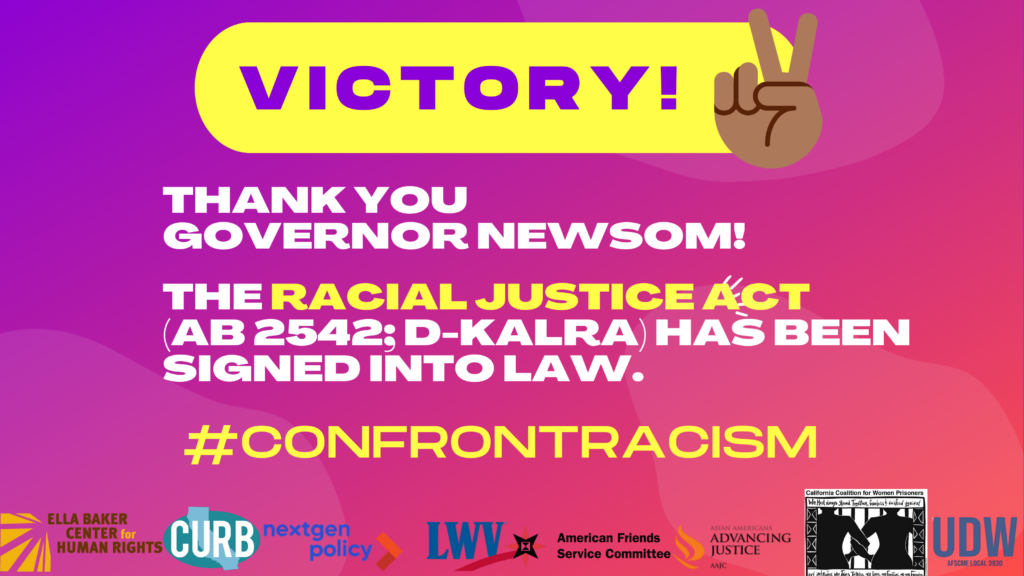 “We are thankful that Governor Newsom signed the Racial Justice Act and proud of our state for taking a fist step at confronting the racist roots of the criminal legal system. Far too many Black families have been torn apart due to systemic racism and it is time that we address that trauma in our courts. We look forward to our state moving ahead in centering racial justice as we continue to address our role in the incarceration crisis.” -Amber-Rose Howard, CURB.

The Racial Justice Act is the first law of its kind in California that prohibits the state from using:

Explicit bias against a defendant based on race, ethnicity, or national origin

Bias at trial and in jury selection

Systemic racial disparities are pervasive in mass incarceration in California, where Black men are over eight times more likely to be incarcerated than white men. Nearly a hundred advocacy organizations across the state urged support for this landmark bill to address systemic racism in the court system.

Thank you to Assemblymember Ash Kalra, the incredible co-authors, co-sponsors, and everyone on the ground inside and outside who made this historic moment possible. CURB is beyond proud to support this landmark legislation.

During this powerful moment when people across the country are calling for much needed reductions in police budgets, it is imperative that we connect the dots between ALL forms of state violence. The brutality of policing doesn’t end in the free world. We are here to remind everyone that the Corrections Officers in prisons are police too.

Police officers are a person’s first contact with law enforcement. If a Black, Brown, Indigenous Native or person of color is not killed during a police encounter, they are likely mistreated and often charged with a crime. Police are the agents responsible for handing vulnerable lives over to their big brothers at the department of corrections, to be forgotten, erased, tortured and sometimes sentenced to die in cages.

Prisons are essentially racist police states run by the Depart of Corrections and Rehabilitation (CDCR).  Police who work behind bars –– known as Corrections or Correctional Officers (COs) –– are able to conceal bad behavior in ways cops in the free world can’t. This degree of impunity facilitates the rampant abuse of incarcerated people, who are seldom believed. For people in women’s prisons, sexual and gender-based violence are often used by COs as a means of control. Incarcerated people report that inside and outside of prison, folks with a badge have always acted as though rules do not apply to them.

CURB is calling for all people who support #DefundPolice to include ALL types of policing in their demands. Out-of-control cops are on the streets, in the jails, in the prisons and detention centers, causing the same level of harm. Fewer prisons means fewer police incentivized to fill them. CURB will fight to compel California to divest from state prisons and CDCR and invest in healthy communities.

California’s state prison system is notoriously overcrowded. Since 2013, California prisons have reduced their population from 150% of design capacity to just below the court-ordered cap of 137.5%. This is a positive–– albeit glacial––move in the right direction. And yet, the overall corrections budget has grown steadily every year, from $8.9 billion (2012-2013) to a proposed $13.4 billion in 2020-21, up​ ​from $12.8 billion last year (2019-20). If we account for  all costs allotted to state corrections,  the budget is closer to $16.5 billion–– almost TWICE  the amount allocated to corrections just in 2012-2013. This wasteful increase in the 2020-21 general fund includes a steady $1.5 billion for local community corrections and nearly $800 million to expand and enhance law enforcement activities. Does this sound like a responsible budget for California?

By demanding state owned prison closures, we are demanding the following:

-divestment from the California Department of Corrections and Rehabilitation/state police, local police and sheriff agencies;

-investment of all funds from those agencies into community-based resources

-a revision of the penal code that defines crime and punishment; changes in sentencing structures to end extremely long sentences;