Will you fight for a stronger California?

It was another Tuesday, and the Los Angeles Board of Supervisors was meeting to decide on the next steps to construct the $3.7 billion jail plan. As I listened to the board discuss their plans to build more jails, I stood up and started leading the room to fill it with chants of “no more jails”, “reject the EIR”, and “this jail plan is disruptive” with students from FREE LA High School chiming in with individual messages to each board member. 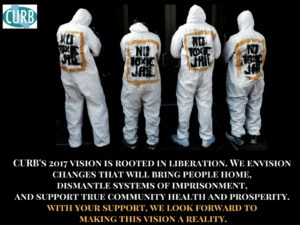 After more than seven years of organizing against the massive jail plan, organizers, advocates, and community members were demanding that the board walk out on the jail plan — not the community. It was a powerful day, and although it resulted in the board moving forward with the jail plan, it also sparked a new sense of power among all the new and veteran organizers that have been fighting for a strong Los Angeles that doesn’t rely on incarceration.

CURB and its members were the reason that I felt empowered to take action that day.

This action is only one of many that CURB and its members have coordinated throughout the state to stop county jail and state prison expansion. Over the years, CURB has been involved in eleven fights against the expansion of prisons and jails, from San Diego to Santa Cruz. CURB will continue to support local work, and is about to embark on a fight against the largest prison expansion plan in California’s history: the replacement or refurbishment of the state’s 12 oldest prisons.

We need you now more than ever to step up and fight for a stronger California with CURB. Would you donate $25, $100 or $500 today?

Growing up in LA, I saw the Black and Latino people in my neighborhood get incarcerated because they were trying to survive. There are not a lot of options in our neighborhoods, with very little resources and a lack of jobs. I saw people trying to make ends meet the best way they could, and saw them get criminalized for it. I know that this is not just a story that happens in Los Angeles, but impacts all our communities.

The work of the CURB coalition amplifies our story and makes room to imagine new transformative approaches to harm, creates equitable access to employment and services for those most impacted by the system, and shares that knowledge with communities across the state.

And we can’t continue this work without your support.

As a member of the coalition, I can’t imagine our work without CURB. I have experienced the state and local grassroots advocacy presence the coalition leads. I have contributed to creating amazing resources and tools that build up our skills as community leaders. And I have witnessed the impact that people power has on decision makers throughout the state.

As an organizer who has experienced the issues of racial inequality, mass incarceration, and police violence that continues to impact me and my family, that Tuesday in LA is something I will always remember. I know it is just the beginning of the long fight that we have ahead of us. And I appreciate you for being a part of it.

I believe that we will win. And I know we will win with you by our side. 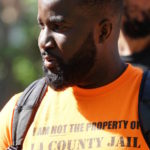 A member of Californians United for a Responsible Budget