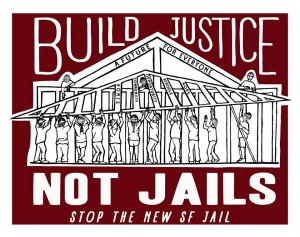 The No New SF Jail Coalition is gearing up to bring the jail fight to the new San Francisco Board of Supervisors, and we need your help.

On December 1st, the board will review a series of proposals put forth by the city’s work group on alternatives to the jail at 850 Bryant. Though we successfully advanced recommendations of bail reform, supportive housing and services, we will need to keep up the pressure in order to move the city away from its reliance on jails.

The two jail proposals that we defeated two weeks ago show us what we are up against. The District Attorney’s favored proposal is a mental health jail that would keep mentally ill prisoners under the Sheriff’s authority, instead of receiving care in community. The other, an entirely new jail proposal from the Sheriff’s Department, clearly moves to entrench jailing as a solution to the unmet needs of city residents.