LA: Honor women with services, not a new jail! 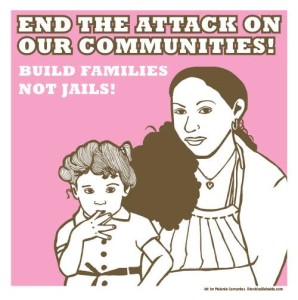 As we celebrate International Women’s Day and Women’s History Month, we must urge Los Angeles County to honor women, transgender, and gender non-conforming people in our community with financial and program support for services — not to spend critical taxpayer dollars to construct a new women’s jail.

In L.A. County, women are jailed for as little as failing to pay parking tickets and other “crimes” of poverty. Women in L.A. are in dire need of services: 38.9% of single mothers and our children live below the poverty line. Almost 14,000 families on CalWORKs, overwhelmingly single mothers with children, were recently classified as homeless; women and children are the fastest-growing population of homeless people in L.A. County.

Rather than spending billions building new jails, L.A. County needs to use those resources to reduce the growing poverty of women and children, to prioritize keeping families together and keeping people housed, nourished and healthy. We need a living wage for all workers including mothers and other caregivers.

To the outrage of grassroots women’s networks and community-based organizations, the L.A. County Board of Supervisors is trying to pass off a new women’s jail as ‘gender responsive’ rather than the environmental and human tragedy that it would be.

We reject the County using our suffering and our struggles against discrimination and for equity to undermine us.

In the month highlighting the oppression women face in every area of life, we ask the L.A.County Board of Supervisors to halt plans to construct another jail for women.

The County proposes to build a new women’s jail, more than 1600 beds, out in Lancaster. There is no consideration for reducing the current women’s jail population. Those imprisoned will be disproportionately Black and Brown women, transgender, and gender non-conforming people. The County and the State must address the real economic, medical, mental health and social problems women face, and decriminalize crimes of survival, drug addiction, and women suffering from mental illness. This new jail is not a solution, but a part of the problem. Like the current women’s jail, it will be a site for even more physical and mental abuse and medical neglect.

On International Women’s Day, and every day, we ask you to commit to support self-determination for women, transgender, and gender non-conforming people.

As women’s rights and gender justice advocates, supporters of reproductive justice and trans-power, as women of color, as mothers and other primary care givers, we know the support we need and we know where County resources should be going: to families and communities, not for more imprisonment and jail expansion.

On International Women’s Day, and every day, we ask you to support housing, holistic health care, access to clean air and water, quality education, and a living wage with dignity for all people.

Join us at our next LA No More Jails Coalition meeting:

Californians United for a Responsible Budget

PrevPreviousBuild a California we can all be proud of!
NextCome and make art with LA No More Jails!Next