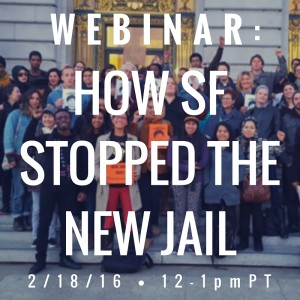 Join CURB on Thursday, February 18, from 12pm-1pm (PT) for a webinar about how the No New SF Jail Coalition stopped San Francisco’s proposed new jail, and learn valuable lessons on how to stop a jail in your town!

Since early 2013, CURB members and allies have fought tirelessly to stop plans for a new jail in SF, building an incredible network of allies and encountering obstacles of all shapes and sizes. Almost three years of organizing came to fruition in December when the San Francisco Board of Supervisors unanimously rejected funding for the new jail.

While this was a historic victory, the fight is not over. SF won’t be building a new jail any time soon, but more than 40 other counties are still trying to build new jails, and the governor is looking to allocate another $250 million for jail construction in the upcoming state budget.