We are stronger than ever in our fight against the SF jail!

We are so close to stopping the new jail in San Francisco! 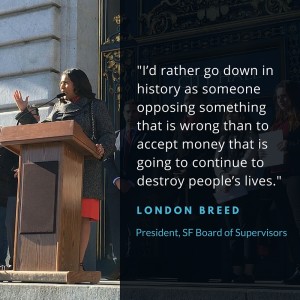 “Although it pains me to turn down $80 million, my grandmother used to say ‘all money ain’t good money,’ and this is bad money,” said Breed. “This is money for a bad purpose. And I’d rather go down in history as someone opposing something that is wrong than to accept money that is going to continue to destroy people’s lives. We can do better and we will do better.”

Thanks to your calls, emails, and presence in City Hall, we are closer than ever to stopping this jail. But we need to make sure we have the votes, so we cannot stop now!

Email and call the Supervisors who have not yet declared their opposition to the jail, and let them know that we cannot move forward with a jail that promotes the violent repression of the City’s most marginalized residents.

Then, join us tomorrow at the full board hearing to demand our city implement real solutions — not more policies that destroy the poorest communities and families in our city.

See you there! Together, we will stop this jail!

PrevPreviousBreaking the Silence
NextThere's no such thing as a "good" prisonNext