Sacramento, CA — This morning, community members who have been fighting jail expansion across California will present state officials with their recommendations of formerly incarcerated leaders to guide the reinvestment of Proposition 47 funds. At the same meeting, the Board of State and Community Corrections (BSCC) is set to vote on approving a half billion dollars to build new jails in 15 counties.

“Californians didn’t vote for Prop 47 so that we could reduce prison populations just to begin building new jails,” said Kim Carter, Executive Director of Time for Change Foundation and member of the community slate. “The BSCC should take the money they want to spend on jails and build some affordable housing. Reducing recidivism and increasing public safety means people need access to housing and jobs, not jail beds.”

At this morning’s meeting, the BSCC will begin forming the committee charged with distributing Prop 47 funds, which are earmarked for mental health treatment, substance use treatment, and diversion programs. To ensure the funds are reinvested in a way that strengthens communities, community members are nominating a 14-member slate of committee members, composed entirely of formerly incarcerated leaders from across California who are experts in substance use treatment, reentry programming, housing, and mental health treatment.

“The resources need to be made accessible to those communities most impacted by mass incarceration,” says Jerry Elster, Healing Justice Coordinator at American Friends Service Committee and a member of the community slate. “Only our community-based organizations can provide the self-sufficiency we need, and that’s where the Prop 47 funds should be directed.”

Due to the agency’s key role in funding jail construction, advocates are concerned that without the guidance of these community members, the Prop 47 funds may be used to support jails and law enforcement programs. Indeed, immediately after the committee chairs have been appointed, the BSCC will vote on whether to approve $500 million for jail construction in 15 counties. Community members in these regions have voiced strong opposition to these jail projects, which they say will harm their communities and take funding away from vital social services.

“Sheriffs across the state are justifying this jail-building frenzy by claiming the new jails will improve treatment of incarcerated people”, says Diana Zuñiga of Californians United for a Responsible Budget. “They are positioning themselves to receive more and more funds to operate their new jails either from Prop 47 or Realignment dollars.”

Prior to the BSCC meeting, CURB members and allies will gather for a press conference and rally at 9:30 am. Community members will join in solidarity against jail construction, present the Community’s ESC, and demand that Prop 47 savings be invested in community-based solutions. Spokespeople will be available to speak with the media throughout the morning. 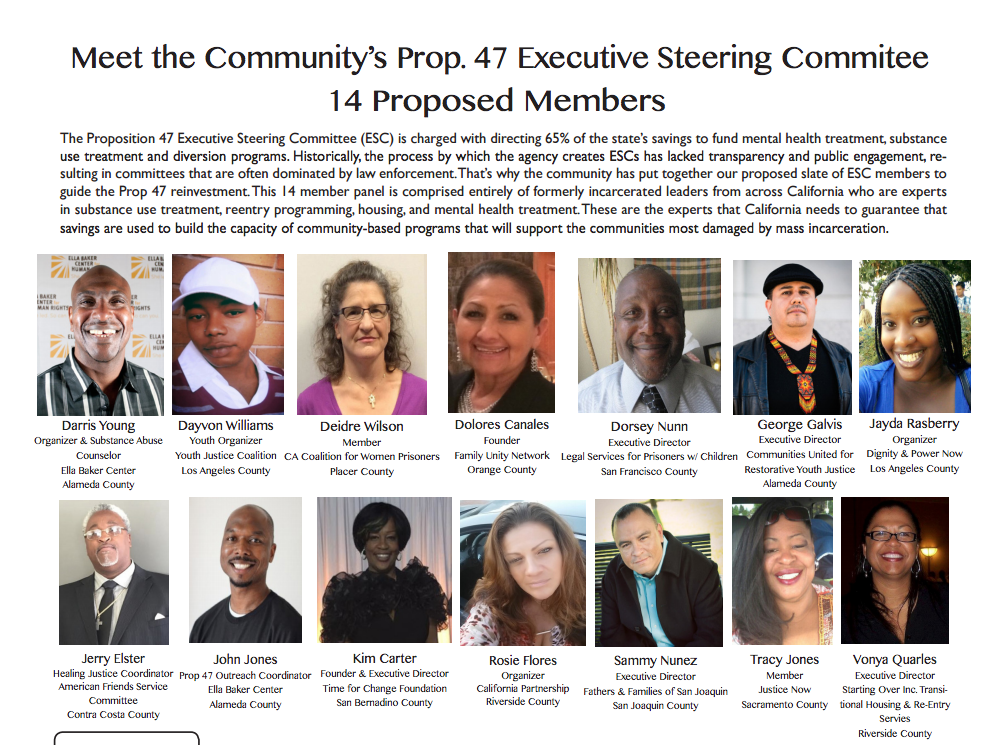