SF: Turn Up Tomorrow, Feb. 10 For Your Trans Sisters!

Taja de Jesus was stabbed to death on the streets of San Francisco’s Bayview neighborhood on February 1, 2015. 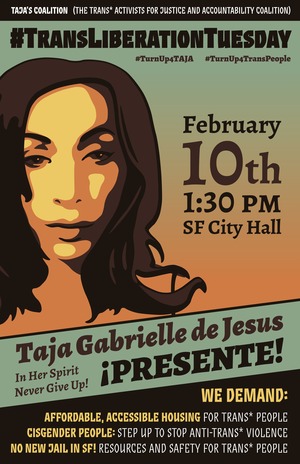 Taja is the fourth known trans* woman of color to be violently murdered in California in the last four months and the fifth in the United States in 2015.

We recognize this epidemic of violence as being deeply rooted in systemic racism, trans* misogyny, class inequity, and lack of access to affordable housing for trans* communities.

This is a national crisis in which the most vulnerable members of our community are fighting for their lives. In Taja’s memory, we will not relent in demanding justice.

A call to action has been issued for: Trans* Liberation Tuesday on Tuesday, February 10th 2015 to demand an end to the systemic violence targeting trans* communities.

The agenda for the action is:

1:30pm:  Gather at SF City Hall for a Die In and Press Conference (Polk St)

TAJA’s Coalition has issued the following demands in advance of Tuesday’s action:

PS. Trans* is an umbrella term that is used to include folks who identify as transgender and transsexual as well as other identities where a person does not identify with the gender they were assigned at birth.

Please note: Cisgender people and white trans* allies are asked to review the participation guidelines on the Facebook event page.

PrevPreviousStop us from organizing at the Santa Cruz jail? We say no way!
NextStaff Transitions at CURBNext