Gov. Brown Backslides on Corrections Budget, No Substantial Reductions to the Prison Population Only Costly Expansion 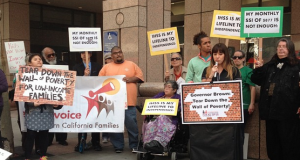 SACRAMENTO, CA – Gov. Brown’s 2015-16 Budget, released this morning, defies comments earlier this week that the administration is committed to shrinking California’s over-sized prisons by increasing prison spending by 1.7%, bringing the total Corrections budget up to $12.676 billion.

“If the Governor believes that ‘we can’t pour more and more dollars down the rat hole of incarceration’ and has actively attributed the voice of the voters in this decision, then why is he increasing spending on corrections, planning for more prisoners rather than fewer and defying the demands of the Federal Court to further shrink the prison system?” asked Christina Tsao of Critical Resistance.  The proposed increase of funding for corrections is partially due to 13 new reentry hubs.

California’s overwhelming passage of Prop. 47 was widely recognized as a mandate from voters to further reduce the prison population. County officials in Los Angeles have estimated an annual reduction of 2,500 in their jail population, however today’s budget predicts that in 2015-16 only 1,900 people will be released from state prison under the proposition. The budget highlights the release of people from prison as a result of the expansion of good-time credits (4,418) and elder parole (115). The budget does not outline any further plans to expand these efforts.

“Today’s budget shows the success of parole and sentencing reform measures in beginning to reduce crowding in California’s bloated prisons,” said Diana Zuñiga, Statewide Organizer for Californians United for a Responsible Budget. “Then why is Governor Brown still spending millions of dollars to open thousands of new prison beds, instead of implementing even more aggressive population reduction reforms?” asks Zuñiga. The budget anticipates that 2,376 new state prison beds will open in Feb. 2016 at 3 different locations.

“Today’s budget maintains California as #1 in poverty and #1 in prison spending.  This is not an accident, “ said Vanessa Perez from Time for Change Foundation. “This morning Brown applauded the legislature on a balanced budget but we need to tear down the wall of poverty and invest more into vital programs and services that will lift the most vulnerable in our community out of poverty and stop wasting money on building new prisons walls. That is something that will be worthy of an applause”.

After years of cuts, today’s budget includes an increase in spending on K-12 and higher education.  Education advocates, particularly in the UC system would like to see even further increases to prevent tuition hikes. “Higher educations in California has needed more funding for years. As we see tuition hikes happening for UC students across the state, here in San Diego they are building new prison beds at Donovan State Prison,” says Allyson Osorio a student working in External Affairs at UC San Diego. “We should support the students in California and stop wasting precious funding to increase incarceration.”

CURB will join the California Partnership and other anti-prison and anti-poverty groups today to discuss Gov. Brown’s proposed 2014-15 State Budget at five press conferences across the state.

PrevPreviousGovernor Brown – build for our future, don't incarcerate it!
NextReport Released on State Funding Options for LA Jail and Diversion: Advocates call for an immediate halt to new jail and more investment in servicesNext