Exposing a national crisis in Black mental health behind bars

When Dr. Samuel Cartwright coined the term “drapetomania” in 1864, he advanced a historical agenda to secure Black subjugation in America. Cartwright’s diagnosis of the desire for freedom amongst enslaved Africans as a form of psychosis exposes two important realities about mental health in the United States. 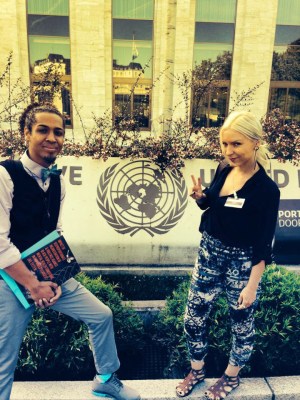 On Aug. 12, Mark-Anthony Johnson and Lynwood social worker Kristina Ronnquist pause at the entrance of the United Nations in Geneva, where they submitted the Dignity and Power Now report, “Impact of Disproportionate Incarceration and Abuse of Black People with Mental Health Conditions in World’s Largest Jail System.“ for review of U.S. compliance with the International Convention to Eliminate all forms of Racial Discrimination (CERD).

First, the mental health of people of color in the United States, specifically Black people, is not a neutral arena. It is a critical battleground where racist ideologies have leveraged medical justifications for restricting Black people’s freedom.

Secondly, the mental health infrastructure in the United States, and lack thereof, is an expression of the historical agenda that Dr. Cartwright’s claim to fame represents. Promoting “drapetomania” as a clinical diagnosis only a year before the Emancipation Proclamation was signed posed strategic value to the Confederacy, which was being threatened by a civil war and needing to refine its justifications for chattel slavery in the United States.

The current crisis of criminalizing and incarcerating Black people with mental health conditions across the country is an extension of these two historical trends. 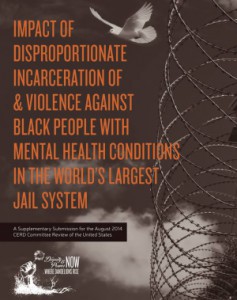 Over a period of two days, the United States was questioned and challenged by 18 U.N. committee experts who critiqued the nation’s deficiencies in addressing racial disparities. Our shadow report was an intervention not only in the local county conversation, but also on an international stage to expose a national crisis of criminalizing Black people’s mental health in the United States.

Dignity & Power Now UN report cover 0814The factors that account for this disproportionate impact are numerous. Black people, for example, are more likely to be misdiagnosed and at the same time less likely to receive the most effective treatments. Black people with mental health conditions are two to three times more likely than people of other races to be incarcerated as limited access to services increases the risk of incarceration.

The lack of community services, barriers to accessing them and lack of quality treatment upon access results in a systemic equation whereby “treatment” for Black people means incarceration.

In fact the Supreme Court ruled in 2013 that California needed to reduce its overcrowding that was exposing prisoners to greater risks of violence, medical neglect and abuse, lack of mental health care, and death. The realization that jails operate as de facto mental health facilities has gained more traction in recent years; however, the response has not been comprehensive or substantial enough to remedy the problem.

The situation of the mentally ill in jail is so dangerous and oppressive that the Department of Justice found unconstitutional conditions for the mental health population in  LA County Jail system (May 2014) and a high level of physical abuse and the violations of rights for adolescents in New York’s Rikers Island Jail – particularly those with mental health conditions (August 2014). That tells us that the crisis persists.

Dr. Samuel Cartwright’s term “drapetomania,” coined in 1864, labeled the desire for freedom amongst enslaved Africans as a form of psychosis.
In fact, since the Civil Rights of Incarcerated Peoples Act was passed in 1997, the Department of Justice’s Civil Rights Division has found violations of the constitutional rights of people with mental health conditions in 35 correctional facilities across 25 states. Los Angeles is just one of the more recent exposures.

Despite these conditions, the Federal Bureau of Justice Statistics has no mechanism for the regular collecting of intersectional data based on the race and gender of incarcerated people with mental health conditions across the country. This creates serious barriers to monitoring the local and national trends.

Why is Los Angeles relevant?

As Los Angeles County develops plans for the diversion of people with mental health needs from the jails, it is also expanding jail capacity. It continues to stay the course despite the copious evidence and stories from our loved ones leaving the jails, that incarceration exacerbates mental health conditions.

In fact, in recent years there has been a movement for specialized detention facilities that are being couched as more responsive to the needs of prisoners. Californians United for a Responsible Budget (CURB) has been pushing back against the county and state push for “gender responsive” prisons and jails – the tagline for women’s facilities.

Though Los Angeles County claims to be planning to divert many mentally ill people from jail, its new jail plan is to tear down Men’s Central and erect a new “mental health jail” for the high number of mentally ill in the jail now.

Guest commentary in the LA Daily News by Patrisse Cullors-Brignac of Dignity and Power Now (DPN) and Diana Zuñiga of CURB explains why those of us fighting jail expansion think “A mental health jail is an oxymoron; diversion is what’s needed.“

The push for category specific incarceration further entrenches our loved ones into a system that cannot protect their rights, safety or humanity. In fact, Assistant Sheriff Terri McDonald recently reported to the Board of Supervisors that there has been a 47 percent increase in use of force at Century Regional Detention Facility, Los Angeles County’s dedicated women’s jail facility.

She attributed this increase to the rise in the mental health population at the facility. The pursuit of both mental health diversion and jail expansion undermines any comprehensive effort to address the crisis at its root.

A comprehensive diversion program would make use of services that have already proven to be effective, including Full Service Partnerships and Aggressive Community Treatment. Additionally, it is important that we are imaginative in how we envision the services our people deserve.

Job training and permanent job placement, permanent housing, and supportive services that include the intimate networks of those directly impacted are key to the long-term sustainability of mental health diversion.

The logic underlying the continuation and funding of the mass incarceration of the disproportionately Black mentally ill and Dr. Cartwright’s medical breakthroughs is the same: Black people’s mental health cannot be achieved, so society has to maintain extreme and inhumane restrictions on their freedom.

Mark-Anthony Johnson is a member of Dignity and Power Now (DPN) (www.endsheriffviolence.org). DPN, a multi-racial grassroots organization in Los Angeles and a member organization of Californians United for a Responsible Budget (CURB), fights for the dignity and power of incarcerated people and survivors of sheriff violence and their families with the goal of ending state violence and mass incarceration. Mark-Anthony and DPN can be reached at endsheriffviolence@gmail.com and can receive mail at the CURB LA office: P.O. Box 73688, LA CA 90003.