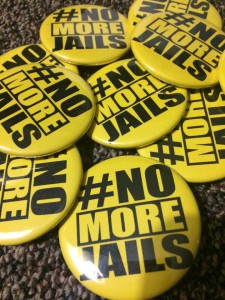 “Angelinos do not need more jails,” says Dayvon Williams, Youth Organizer for the Youth Justice Coalition. “They hurt our communities. Study after study commissioned by California counties show that locking people up does not create safer communities. Multiple reports recommend alternative ways of reducing the number of people locked up. It makes more sense to use resources for life-affirming programs, job programs and services that will improve our lives.”

Los Angeles residents will be opposing the proposed 1,604-bed women’s jail at the Mira Loma detention center in Lancaster. Beginning with a rally at the Lynwood Jail in LA and then a 70-mile caravan to Mira Loma to pressure the Los Angeles Board of Supervisors to stop funding jail construction projects. An additional rally and art demonstration will be held later in the afternoon at the Mira Loma facility.

“In Adelanto we are mobilizing specifically against the expansion at the GEO detention center and the lack of political imagination and will that has lead Adelanto to have over 9,000 people incarcerated within a 10-mile radius,” says Vickie Mena of CIVIC. “It is a shame that we continue to build facilities to incarcerate people in Adelanto, while the cities first high school fought to open after two years of sitting vacant. Where are our state and local priorities?”

San Bernardino will be mobilizing to oppose additional construction at the Adelanto Detention Facility and the proposal from their county to contract with LA County to house prisoners at the recently expanded Adelanto County Jail.

“Counties need to justify their application for state funds by showing that there are strategies in place to support people released from prisons and jails to reduce recidivism rates and the population behind bars, but that isn’t happening,” says Maribel Nuñez of California Partnership. “It looks like Riverside County is deliberately not implementing population reduction strategies so they can continue expanding their already sprawling jails.”

Riverside will be mobilizing at Robert Presley Detention Center against the jail expansion plans where there county is looking build 10,000 new jail beds by 2020 and recently approved a bond measure to make this possible.

Activists in San Diego are also fighting against prison expansion. On August 16th, San Diego No More Prisons will join with women from “A Trail for Humanity” in march from Chicano Park to Friendship Park in protest of the proposed plans to build another wing to Donovan state prison, a women’s jail, and the an end to the criminalization and deportation of people of color.

English and Spanish speaking spokespeople will be available throughout the day.