The Desert Sun received the reaction we expected to our Friday editorial saying the overcrowding the Riverside County jails was unacceptable.

Mark Pereyda of Cathedral City points out that The Desert Sun was among those who opposed the proposed jail in Whitewater, which would have provided 7,200 beds. He’s right. We did, and would again based on the study that said it would harm our tourism industry — the lifeblood of the Coachella Valley.

“No one wants a jail in their backyard but, would you rather have these criminals incarcerated or living among you, me and our families in our neighborhoods as they look for their next victims?” he asks.

We also received three other letters from out of our coverage area.

“It is my belief that jail overcrowding is a symptom of a broken system and the number of people that return is indicative of the same,” writes Vonya Quarles, executive director of Starting Over Inc., based in Corona.

She suggests bail reform as an alternative.

Mohamed Shehk of Critical Resistance, based in Oakland, takes us to task for supporting jail expansion.

Actually, we support the new Indio jail mainly to replace the unsafe conditions in the old jail, which has blind spots where inmates can be attacked by gang members. We also came out in support of alternatives, such as treatment for drug offenders instead of incarceration.

Emily Harris of Californians United for a Responsible Budget, also based in Oakland, wrote in support of those alternatives.

“We can’t solve violence and harm by building new jails. … Investing in out-of-lock-up alternatives to imprisonment such as drug treatment, affordable housing or mental health services for Riverside’s most disadvantaged populations would be a much wiser use of county resources, and could address root causes or incarceration,” she writes. “Riverside is just another county repeating California’s prison boom mistakes of the 1980s.”

It’s a tough issue. Of course we want our streets to be safe, but the report that the Indio jail was 44 percent over capacity sets off alarms, not only about inhumane treatment of inmates but of putting the county at risk of lawsuits.

What do you think? Should the county keep building jails? Should it dust off the Whitewater plans? Or are treatment for drug officers, home confinement for those awaiting trial and bail reform better alternatives?

Let us know what you think via email at DesertSun.com/letters

As a resident, property owner, and business owner in Riverside County, I would like to comment on the editorial about Riverside County’s jail overcrowding. Jail overcrowding and expansion is a real concern of several groups including the Alternatives to Jail Expansion Coalition, Riverside All of US or NONE, and several county officials. 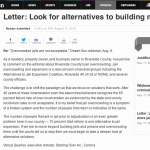 The challenge is to shift the paradigm so that we focus on solutions that work. After 40 years of mass incarceration even the staunchest believers recognize the 65 percent failure rate of over-incarceration as evidenced by the state and county recidivism rates is not acceptable. It is my belief that jail overcrowding is a symptom of a broken system and the number of people that return is indicative of the same.

The number of people that are in jail prior to adjudication is an even greater problem here in our county — 70 percent. Bail reform is one alternative to jail expansion. If we are to move beyond building jails and prisons and overcrowding them until the courts tell us to stop then we must begin to take a deeper look at alternative solutions.

PrevPreviousHave you ever seen a line this long?
Next10,000 new jail beds in Riverside?Next