The story behind the 2015 California Budget Act

by Emily Harris, Californians United for a Responsible Budget (CURB)

​In mid-June, Gov. Brown signed the Budget Act of 2015, which shows no vision for the future of most Californians. Despite ample opportunity, this budget does not show a path to repair the tattered safety net, to reduce or eliminate what is now the highest poverty rate in the nation, or to restore a California in which all can thrive. 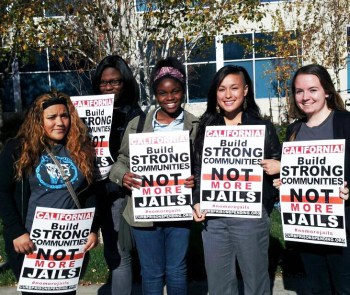 The budget deal increases funds wasted in the “rat hole” of incarceration to nearly $12 billion, while including no significant restorations to anti-poverty and social safety net programs that have suffered years of cuts and could lift low-income Californians out of both poverty and prison.

In the face of community and court pressure for sweeping criminal justice reform, Gov. Brown and the Legislature have made only small changes to their troubling addiction to mass incarceration. For years we have seen our elected representatives balk at opportunities presented by realignment and the court’s prison crowding order to abandon failed policies that have imprisoned more and more Californians over the last several decades. We thought this year was going to be different. Unfortunately, that wasn’t the case.

A little bit of background on the fight leading up to this year’s budget:

In the fall of 2013, in an effort to meet a looming court deadline to reduce prison overcrowding, Gov. Brown, with Speaker Pérez by his side, proposed a shocking piece of last minute legislation: SB 105. The proposal included a billion dollars to expand prison capacity by sending more prisoners out of state.

The response was immediate and powerful.

​Groups that had been working on poverty and on prison issues for years came together, organized by​ two statewide networks​, the California Partnership (http://www.california-partnership.org) and CURB(http://curbprisonspending.org), to demand an end to prison expansion and a reinvestment of state funds in anti-poverty programs eviscerated by years of cuts. Environmental justice groups, labor, domestic violence shelters and many others joined the new “Stop the Corrections Budget Grab” coalition in actions across the state and in efforts to sway legislators.

This loud opposition created enough political coverage for Darrell Steinberg and Senate Democrats to stand up and cut a deal that prevented 6,500 additional California prisoners from being sent out of state. Additionally, Speaker Pérez launched the Select Committee on Justice Reinvestment to collect and recommend state investments in alternatives to incarceration.

Several of the proposals that communities have been demanding for decades became recommendations of the Select Committee and were adopted in this year’s budget, along with some steps towards reducing the prison population.

The good: re-entry support and some sentencing reform

The budget finally repealed the ban on people with prior drug convictions from receiving CalFresh (food stamps) benefits and CalWORKs (basic needs support and job training). That such a common sense change took over a decade of organizing to achieve shows how out of touch most legislators are with the harms resulting from these prohibitions and the effect they have on families and single adults trying to start over after release and how such supports decrease the likelihood of subsequent arrest.

Additional proposals of the Select Committee that were adopted in the budget include $10.5 million to be directed to community-based organizations supporting reentry in and outside of prisons or jails and an essential $2 million for drivers licenses and IDs for people exiting prisons and jails.

We are hopeful that as the state continues to seek solutions to costly prison overcrowding, policy makers will consider additional policy decisions that reduce criminalization of poverty and improve opportunities for people who have been imprisoned.

In terms of sentencing reform, the legislature watered down Brown’s proposal that would have made the use of split-sentencing in counties mandatory. Similarly, the implementation of the county level alternative custody program for primary caregivers ignores the failure of the state program to release 92 percent of those deemed eligible for release (3,700 out of 4,000). Sustained pressure in each county will be required to enact these changes.

The budget expedited the historic enactment of an elder parole process that makes people who are 60 years or older and have served 25 years eligible for release, with exceptions for people serving death sentences or life without the possibility of parole. An expansion of medical parole and the establishment of good-time credits for second strikers serving sentences for non-violent crimes are steps that if expanded could have dramatic impacts on California’s prison population.

The bad: More wasteful spending on prison and jail expansion 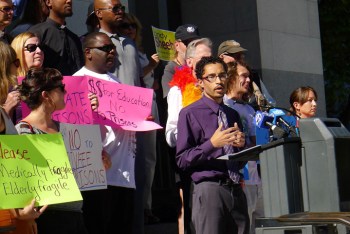 While the legislature was frugal in spending only $10 million to prevent people from returning to prison and jail, it continued the extravagant giveaways of jail expansion funds to counties with the approval of $500 million to add to the $1.9 billion it has spent since 2011 to build more county jails.

Many legislators are more afraid to disturb Gov. Brown’s allegiance with the Sheriff’s Association and California Association of Counties (CSAC) than they are willing to protect California’s most vulnerable populations from a future where going to jail is a prerequisite for access to mental health, drug treatment and social programs.

The response from law enforcement to groups like Stop the Corrections Budget Grab – and to ongoing scandals of violence by sheriffs and corrections officers – has been to co-opt the language of reform in what James Kilgore, in “The Rise of Carceral Humanism and Non-Alternative Alternatives: Repackaging Mass Incarceration,” calls the new “carceral humanism” that “recasts jailers as caring social service providers.”

California law enforcement has jumped on the bandwagon, re-packaging themselves as concerned therapists by trying to get even more funding to prisons and jails by “institutionalizing the funding of mental health and other services behind the walls, further diverting money from the already bare bones social services in communities.”

A local cheerleader for that trend is former Corrections Secretary Matt Cate, now running the CSAC, who said, “The additional $500 million in facility investment will help build the right kind of beds that facilitate reentry and recidivism reduction efforts – giving us the best chance of turning lives around and improving public safety.”

When we read between the lines, it is clear that we can continue to expect the Legislature, the governor, counties and sheriffs to waste money on a future of further prison and jail expansion.

Los Angeles County is on the brink of approving a $2.3 billion jail expansion, of which the $500 million appropriated this year for all 58 counties will pay for no more than $100 million. Deep in the budget is an agreement that the state and LA County will work together to “identify how the state can support the county in addressing the infrastructure needs of the jail system.” 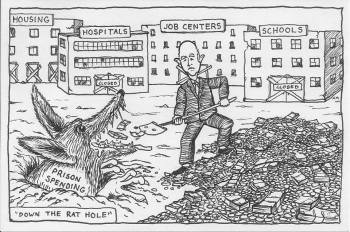 Let’s not be fooled; LA spent the year lobbying for this $500 million in hopes to deflect any opposition by other counties when it comes back to the Legislature for an appropriation that will cover a bulk of their $2.3 billion jail project.

“With $2 billion, LA could construct 2,152 single-parent family apartments, 1,792 transitional apartments for the homeless, 280 youth centers, 60 vocational centers or 240 assisted living facilities for the mentally ill,” outlined Los Angeles based advocates Patrisse Cullors-Brignac of The Coalition to End Sheriff Violence in LA Jails and Diana Zuñiga of LA No More Jails in their recent guest commentary, “A mental health jail is an oxymoron; diversion is what’s needed,” in thePasadena Star News.

What we are up against

The California Partnership description of this budget depicts our future fight: “Piecemeal restorations to services like the ones we see in this budget aren’t a way forward. They are a band-aid on a bullet hole, something to cover up the discomfort of seeing the surface wound, but they do nothing to address the fatal injuries deep inside.”

The corrections budget is similar. The damage done by mass incarceration in jails and prisons is acknowledged, but the band-aid is to expand and renovate the prisons and jails that have produced the problems, rather than to channel people out of those systems and to channel resources away from cages and into restorative and nourishing services.

This budget underestimated the amount of resources available, overestimated the cost of vital programs, and chose spending on debt service, rainy day funds and prisons instead of the people of California and the vital services they need.