In our assessment, we looked at the balance between community-based programs that reduce imprisonment and plans to expand jail capacity or build new jail beds. The third edition of the Realignment Report Card highlights the number of counties that are pursuing the mistaken policies that the state of California has enacted for decades: the construction of cages as a reflex response to social and economic problems. Not only are community-based alternatives more effective, they are less costly. Importantly, in almost all of the failing counties, Sheriffs and Boards of Supervisors are pursuing expansion despite significant local opposition.

Shifting people from State prison to County jail is not a solution to our prison and budget crises. Realignment can most safely and effectively be implemented by using alternative sentencing and community-based services instead of expanding imprisonment and policing, both of which socially and economically costly.

Unfortunately, in addition to AB109 realignment money, Sacramento has offered two funding streams that encourage county jail expansion and has refused to offer incentives for thoughtful decarceration.  AB 900 authorized $1.2 billion in lease revenue bonds for the construction or expansion of jails, and SB 1022 authorized $500 million for jail expansion. If realignment is to be successful, the state must support counties to reduce their jail populations, rather than making plans to grow them.

Californians United for a Responsible Budget (CURB) is a broad-based coalition of over 50 organizations seeking to CURB prison spending by reducing the number of people in prison and the number of prisons in the state.

If you need support on “How to stop a jail in your town” check-out our tool-kit. 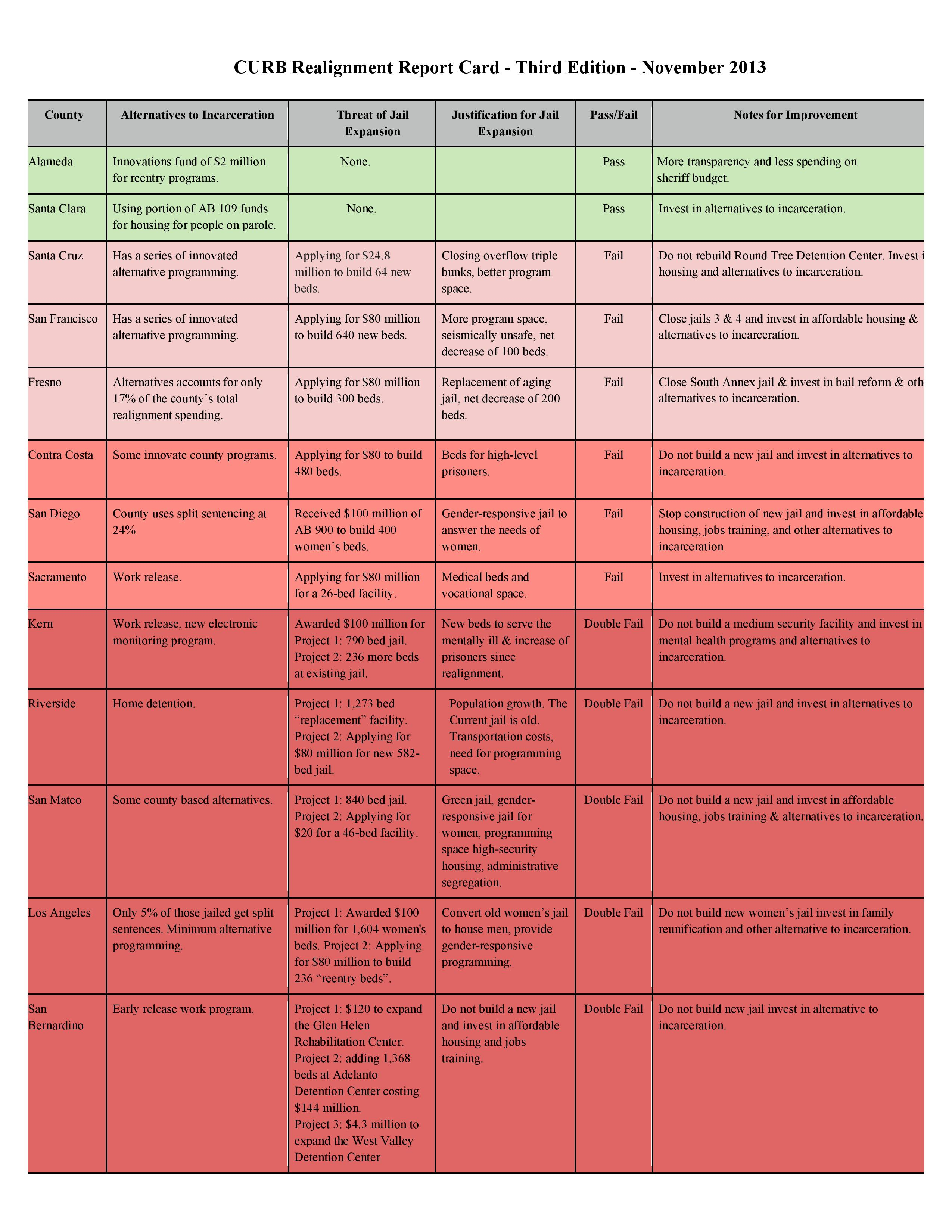 Alameda: Pass. The county developed an Innovations in Reentry funding stream of $2.2 million dollars that was distributed through the County Public Health Department.[1] For the first two years of realignment Alameda County received $29.2 million, the county earmarked $4.1 million for community-based providers, the rest, $25.1 million, went to law enforcement.[2]

Santa Clara: Pass. The county’s plan calls for a three-way split of realignment funds between the Probation Department, the Sheriff’s Department and programming like drug treatment, mental health care and job training. The Board of Supervisors decided not to apply for jail constructions funds, largely because the county can’t afford the millions in additional annual operating costs.  The supervisors also said investing in millions in new jail facilities at this time runs counter to the county’s commitment to expanding alternatives to incarceration, such as drug rehabilitation programs and vocational training. “It’s not only a lot of money, but it’s going to literally cement a direction that you know will be relatively irreversible for probably three decades,” concluded Supervisor Dave Cortese.[3] The county has also established a reentry-housing plan including rental assistance because housing is a decisive factor in successful reintegration to society.

Santa Cruz: Fail. When realignment began, jails were at 125% capacity. The county then successfully reduced its jail population by 20% in the first 6 months through a work release and electronic monitoring program. Despite strong local opposition, the county is now making plans to build a new jail, seeking $24.6 million in SB 1022 funds to build 64 new beds at the Roundtree Detention Center.[4] Residents believe funds should be invested in reentry programming and affordable housing.

San Francisco: Fail. Despite substantial investments in developing alternatives to incarceration and strong community opposition, San Francisco Sheriff Mirkarimi is planning to build a new jail. Currently, county jail capacity is only at 65% and the seismically unsafe jails Mirkarimi is intending to rebuild could be closed outright. The county has applied for $80 million in SB 1022 funds to build up to 640 new beds with a total price-tag of $700 million.[5] The costly new project  would reduce overall capacity by 100 beds.  Over 6,000 people in San Francisco are homeless, and county residents are demanding that the county close aging jails and continue to expand alternatives and provide affordable housing and services instead of rebuilding.[6]

Fresno: Fail.  The county is seeking $80 million in SB 1022 funds to replace the 66-year-old South Annex jail, which would result in a net decrease of 200 beds.[7] If the county lands the state grant, it would have to contribute $8.8 million. About $11.5 million of next year’s realignment budget is committed to the county jail. The money will pay to operate two jail floors, which contain 864 of the 3,291 beds now in use. Though the county has invested some dollars into alternatives to incarceration, these programs make up only about 17% of the county’s total realignment spending. County residents are demanding the old jail be closed, and that the local alternatives be expanded immediately, including a program that would reduce the 69% of the jail population that is awaiting trial.

Contra Costa: Fail. At least 50% of Contra Costa’s realignment budget has gone to the Sheriff’s office for staffing and jail management.  County residents, including state and local elected officials and law enforcement, have voiced strong opposition to the county’s plan to expand the jail. Supervisor John Gioia said “My impression is that we need far fewer jail cells. We should be moving towards alternatives to incarceration.”  However, the county recently applied for $80 million in SB 1022 to build 480 beds.[8]

San Diego: Fail.  San Diego County is moving forward with a $221.5 million dollar jail construction project to build a 1,216 bed women’s jail to “replace” the Los Colinas Detention Facility in Santee. The county received $100 million through AB 900 and is also planning to develop an extra 400 beds at the East Mesa jail. In March, CityBeat reported that from 2007 to 2012, San Diego County had the highest average mortality rate among California’s 10 largest county jail systems and the second-highest suicide rate—in all, 60 people died during that period.

Sacramento: Fail. The county recently re-opened 275 beds at the Rio Cosumnes Correctional Center and applied for $80 million in SB 1022 funds for a 26-bed facility.[9] Sheriff Jones has consistently heightened public safety fears to ensure funding for jail expansion, publicly questioning the efficacy of rehabilitation programs and making baseless statements such as “It’s easy to see there are going to be more folks committing more crime in the community.” Sacramento County has received criticism for not spending enough money on rehabilitation for prisoners since realignment passed.[10] There has been significant opposition to using county funds for jail expansion.

Kern: Double Fail. After receiving $100 million in AB900 funding to build 790 new jail beds, the county is applying for more money to expand the system by another 236 beds. The Sheriff’s Chief Deputy claims new facilities are needed to house the “more sophisticated” realignment population. “We have a reputation as a county that prefers to prosecute and lock up,” said Allan Krautner of the County Administrative Office.[11] Kern County is utilizing split sentencing at only 13%.  Community organizations have vocally opposed the jail plans.

Riverside: Double Fail.  Despite local opposition, the county is moving forward with two expansion plans. The construction of the East County Detention Center in Indio would add 1,273 beds and replace the 353-bed jail at a cost of $350 million.[12] One component of the proposed design is that prisoners will have no direct contact with visitors. The new jail would also add a solitary confinement housing unit, a practice that has been internationally condemned as torture. As of 2009 almost one-third of Indio residents were below the federal poverty level. If the Indio Jail is approved, jail spending would eat up more than 40% of the discretionary general fund revenue for Riverside County.  The county is applying for $80 million in SB 1022 funding for the second project, a 582-bed facility at the Larry D. Smith facility in Banning.[13]

San Mateo: Double Fail. Despite forceful local opposition and multiple rejections by the state for AB 900 and SB 1022 jail construction dollars, Sheriff Munks is moving forward with a new jail construction plan.  The price-tag on this jail plan has ballooned from $165 million –to $400 million to build with operating costs of over $30 million annually.[14] Additionally, the county is applying for $24 million in SB 1022 funds to build 46 beds at the Maguire Correctional Facility.[15] This facility will be used for booking and holding pretrial and high-level prisoners and housing people in solitary confinement.

Los Angeles: Double Fail. The county received $100 million in AB 900 funding to add 1,604 women’s beds at the Mira Loma Detention Center in Lancaster. They are also applying for $80 million from SB 1022 to build a 236-bed female reentry facility at Mira Loma.[16]  For many years, strong community opposition has successfully stalled jail expansion the county. LA County accounts for one-third of California’s state prison population and has been under a federally imposed population cap since the 1980s. The jail system is nationally notorious and Sheriff Baca was recently deemed personally liable for it’s brutal conditions. Only 5% of the county population receives split sentences.[17]

San Bernardino: Double Fail. San Bernardino once invested the vast majority of realignment funding into probation, but in a single year catapulted their Sheriff’s Department spending from $4 million to $25 million. The county is now plowing forward with several construction plans. They’re investing $120 million in expanding the Glen Helen Rehabilitation Center. Additional plans include the addition of 1,368 beds at Adelanto Detention Center; the projected budget has grown from $120 to $144 million. The county is also investing $4.3 million to expand the West Valley Detention Center.

-Yolo County applied for $40 million through SB 1022 for a new programming facility.