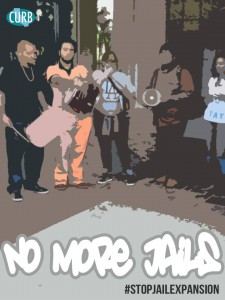 Who:  CURB and LA No More Jails Coalition
What: Press Conference and Speak Out
When: 9am October 8, 2013
Where: Kenneth Hahn Hall of Administration, 500 West Temple St., Los Angeles

Los Angeles— The Board of Supervisors recently approved a long-term contract with the City of Taft, to use a vacated prison to lock up 512 L.A. County prisoners. Community and religious leaders, scholars, youth activists and artists will participate in a press conference outside of the L.A. County of Supervisors to draw attention to their strong objections to the County investing millions of dollars in jail expansion or to send Los Angeles County prisoners to be incarcerated in Kern County rather than investing in alternatives in imprisonment in the Los Angeles community.

“There are clear alternatives that we could implement to reduce the jail population right now that would strengthen our communities and save the county over a billion dollars. The VERA Institute, the Austin Report and the ACLU have all put forth ways to reduce the LA jail population”, states Mary Sutton of Critical Resistance. “Instead of wasting $10 million dollars of AB 109 funding for jail expansion this money should be used for community-based solutions.”

“The plan to send prisoners to Kern County is morally and fiscally irresponsible. The mismanagement of state funding that could be used for community-based solution, but is instead being used for jail expansion this should be a red flag for all LA County residents and California at large. The state and county need to take a good hard look at what the largest county in California, Los Angeles, is doing with millions of unspent rehabilitative dollars”, said former Assemblymember Jackie Goldberg. “It is outrageous to spend more money on jailing people when recent reports state that crime is down.”

Planners of Tuesday’s event are calling on the L.A. County Board of Supervisors to put a stop to the Taft Contract. They are also calling the County to prioritize services and programs for people returning home from prison and jail.

PrevPreviousWe need you to fill the room tomorrow!
Next4 Ways to Fight Jail Expansion in Fresno!Next